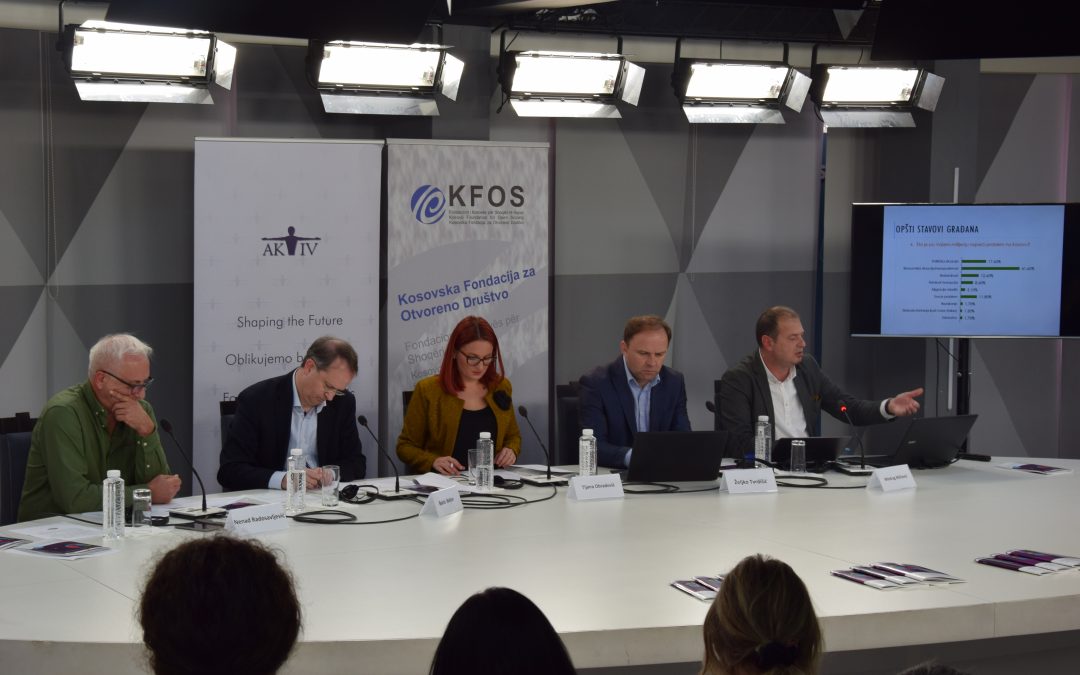 NGO Aktiv’s research ‘Trend analysis 2019: attitudes of Kosovo Serb community’ was conducted with an aim of identifying most important attitudes and perceptions of Kosovo Serb community and has proven that general trends in Kosovo are not are not in favor of and are not encouraging for this community, as stated by 92% of respondents. On the other hand, 50% of respondents perceive consequences of current political process as the main threat to their personal and their family’s security, while 60.2% have stated that there were none of the Kosovo politicians they trust. The research was presented on 19th of November within the premises of Civic Energy Center in North Mitrovica.

Miodrag Milićević, Executive Director of NGO Aktiv, shared key findings of this year’s research, while the results of the Trend Analysis were analyzed and commented by following panelists – Željko Tvrdišić, Journalist, Bodo Weber, Senior Associate of the Democratization Policy Council and Nenad Radosavljević, Director of RTV Mir. For the purposes of a higher level of representativity of attitudes of Kosovo Serbs, unlike previous years (where only four northern municipalities were targeted), this years’ research has included all of the areas where Kosovo Serbs make up the majority.

During the presentation on the main results of the 2019’s Trend Analysis, Miodrag Milićević has pointed out that 55,3% of the respondents have stated that in the following five years they do not plan on staying or living in Kosovo, and that they would leave as soon as the opportunity arises, adding that two thirds of them are in possession of faculty diplomas. He finds the reason behind such a state of affairs in the “insufficient response from the competent institutions”.

A slight different perception of the reasons behind the migration problem was proposed by the German analyst Bodo Weber. He explained that “more and more people are leaving Kosovo, but least due to the socio-economic reasons. This is happening mostly because of the lack of perspectives of the people living in this region, but also due to their pursuit for better living conditions. I’m quite worried, because it’s about a wide-scale migration”. Weber pointed out that the results are devastating, but not that surprising, due to the wrong pathway that the dialogue between Belgrade and Pristina has undergone.

Director of RTV Mir, Nenad Radosavljević, did not agree with the previous statement, by explaining that the results cannot be perceived as devastating if the ‘bigger picture’ is taken into account, meaning that the analysis includes the whole period after 1999. In support of this statement, he cited data from the Trend Analysis, which shows that the number of respondents supporting the Serbs’ participation in Kosovo institutions has continuously been increasing. Namely, in the same survey conducted in 2018, one in four respondents stated that they support the institutional action of representatives of the Serb community in Kosovo, while this year, every third person surveyed expressed such an attitude. Consequently, the number of respondents who expressed a negative attitude regarding this matter is in a significant decline, from 35% in 2018 to 21.7% during this year. Radosavljević clarified his standpoint by adding that “basically a ‘thawing’ of the interpersonal relations took place, while the integration contributed to the more frequent encounters among common people, which consequently brought to the pacification of tensions on a basic, inter-ethnic relations”. When he discussed the fact that only one in seven citizens surveyed believe that independent views and critical thinking are represented in the media in Kosovo, Radosavljević elaborated that the reason for such state of affairs lies in the fact that local media do not have sufficient support from international institutions.

“Kosovo society is in a big trouble, because editors-in-chief of media are individuals who have not written a single letter about journalism, and are yet on leading positions. And the issue with this is that the international community supports such situation”, agreed journalist Željko Tvrdišić. Nonetheless, he added that there is more space for critical thinking in Kosovo than in the surrounding countries. Further, speaking about the idea of delineation/territorial swap/border changes, Tvrdišić said that people are afraid of new conflicts. “However, if someone makes a decision to make it happen and if a decision is really made, everyone will have to catch that train and accept the situation,” concluded Tvrdišić.

Implementation of the research was done in cooperation with partner organization Radio KiM from Čaglavica/Çagllavicë, while the whole initiative was financially supported by Kosovo Foundation for Open Society (KFOS).