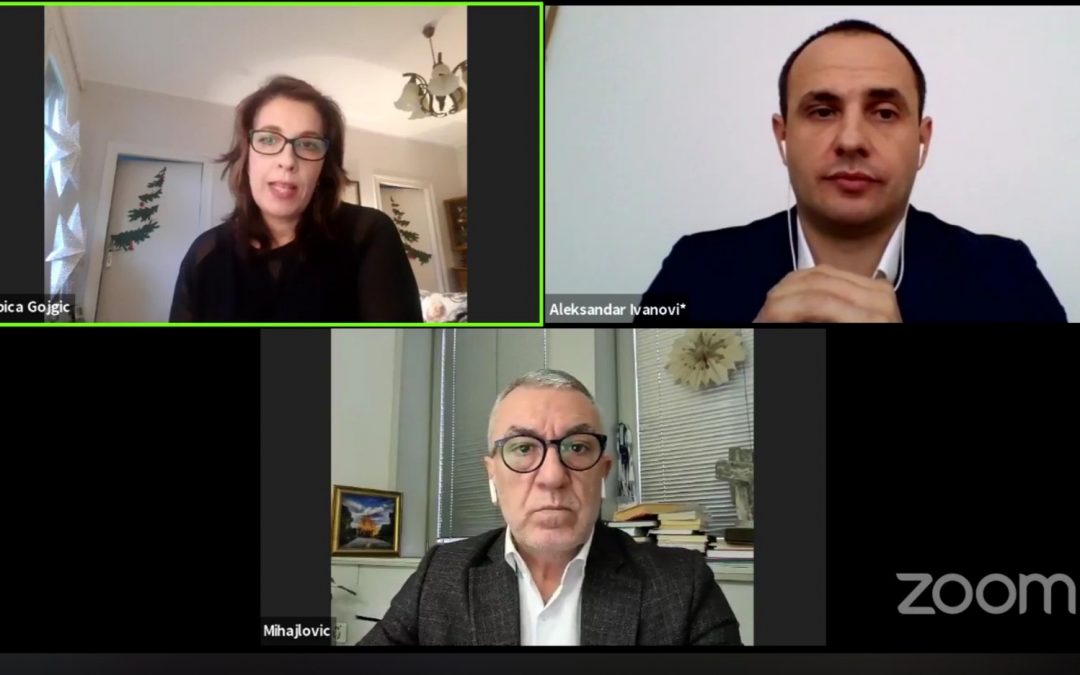 “If we look into the matter in an abstract manner, we see a professional murder that is left to an amateur investigation”, said journalist and former Director of Radio Belgrade Milivoje Mihajlović, talking about the assassination of Oliver Ivanović.  Oliver’s nephew Aleksandar Ivanović emphasized that there was a dark when it came to the investigation in Belgrade. “The only thing we have are the legal proceedings led in Pristina, which are rather unfortunate”.

At the debate of the Mitrovica Social Club “Freedom, Democracy (Un)Justice: three years since the murder of Oliver Ivanović”, the panellists talked about the trust in legal system, perils of engaging in politics nowadays, consequences of Oliver’s assassination for the societies in north Kosovo, Kosovo and Serbia, and many other topics.

A lawyer and nephew of Oliver Ivanovic, Aleksandar Ivanović, points out that it seems as if the planner of the assassination played on procrastination card.

“I do not see we can use any other defence mechanism except for putting a continuous pressure and constantly placing the issue back on the agenda”.

Ivanović deems impossible there are no tape recordings in Mitrovica of setting Oliver’s car on fire, breaking into his apartment and of the actual murder.

“I would first like to see where those people were who set the car on fire and broke into the apartment on the day when the murder happened”.

A journalist and former Director of Radio Belgrade, Milivoje Mihajlović, believes that the legal proceedings are paralysed.

“It seems to me that neither Pristina, nor Belgrade, nor the international community have the slightest interest in solving this murder”, he pointed out.

He believes that the assassination was seriously planned and executed in a highly professional manner.

“If we had this farse with shell casings and abnormal behaviour of the police officers, we could see it was a seriously planned event, a political assassination. It is a form of a cover-up system. There was a chance to create a serious international independent team that would have an insight into archives in Belgrade and Pristina, but that chance failed. There is not enough of political will to shed a light onto this murder”, says Mihajlović.

Ivanović points out that the investigation is actually being conducted in Pristina and that certain pre-investigating actions are being taken in Belgrade.

“We have nothing to interpret in Belgrade because there is only dark there. The only thing we have are the legal proceedings taking place in Pristina and those are rather unfortunate. An international investigation would certainly help here. This assassination has a political background; however, lack of political interest is a political reality at the moment, which I hope will pass”, says Ivanović.

Mihajlović said that an image was being created that both Belgrade and Pristina were actually sending some kind of messages to each other through the statements regarding Oliver’s murder.

When it comes to Kosovo partition, which became popular only after the assassination of Oliver Ivanovic, the speakers point out that Oliver was against this idea.

“He was a target for many, he was a man of dialogue, one of the rare among Serbs and Albanians who believed that coexistence was possible. He had principles, he showed that he could organize people. He was a man of integrity, of coexistence. Upon his assassination, the idea of Kosovo partition appeared, and he was against the partition. He was against the independence of Kosovo. He was a man on the ground, he knew every problem and problems of every man in Kosovo”, said Mihajlović.

“It is true that Oliver was against quick solutions because he thought that way something big was being traded for his people. He thought it would not bring anything and a lot would be lost. There are no quick solutions. Various centres of power in the world have changed, the intensity varied, and all this shows that the Kosovo question cannot be resolved overnight”, says Ivanović.

For years, Serbs in Kosovo have felt betrayed, sold, marginalized, left to be managed by the underground, and the murder of Oliver was a stamp on the defeat of Serbs in Kosovo”, said Mihajlović.

“In Kosovo, everyone must think as they are told to, only Srpska List exist there”, said Ivanović.

“If we look at the matter abstractly, we see a professional assassination which is left to an amateur investigation”, emphasized Mihajlović.

“I am certain that the time will come when this situation will change. I believe there are people in Belgrade and Pristina who have a more serious view of the future and they will not allow this murder not to be solved”, says Mihajlovic adding that “this assassination will sooner or later be clarified”.

The debate titled “Freedom, Democracy, (Un)Justice: three years since the murder of Oliver Ivanovic” was organized by the NGO Aktiv with support of the Kosovo Foundation for Open Society (KFOS).