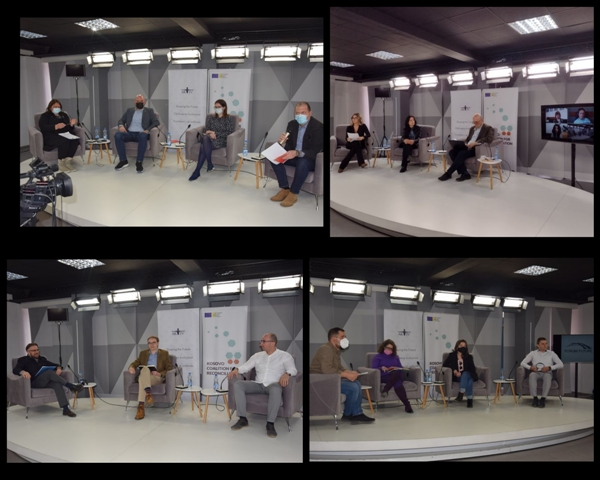 Providing a public and open discussion on dealing with the past, present and future relations of Serbs and Albanians with a special focus on the language gap that exists and prevents members of both communities and especially the younger population to communicate and create a multiethnic multilingual society was the topic of this year’s Forum future conference. Representatives of civil society, educational institutions and young activists discussed these topics.

Forum Future 2021 was organized by the NGO AKTIV as a member of the Kosovo Coalition for Reconciliation, with the financial support of the European Union and the National Endowment for Democracy NED.

In his introductory speech, the program director of the AKTIV organization, Miodrag Milicevic, said that interethnic tolerance and building trust between ethnic communities are the basis for building a common future in Kosovo. He especially emphasized that the topic of this year’s conference, the issue of language and communication, is one of the key points in that process. According to him, the goal of this conference is to try to offer some concrete models for solving the challenges we face, and that is also our obligation to future generations who deserve a dignified life based on true values ​​and mutual respect.

The first panel discussion addressed the issue of learning Albanian and Serbian within the education system. The introduction of mutual language learning is certainly a key reform that would help reduce the distance that exists between the two communities.

“Knowledge of other languages ​​has many benefits. In addition to the possibility of employment, there is also the possibility of a better understanding of the other side, what their fears are and what their needs are. The good news is the opening of Department for Balkan Studies and this is a big step forward, “said Veljko Samardzic, Executive Director of the Center for Social Initiative (Vocup Project), while Nora Bezera, Professor at the Department of Albanology, University of Belgrade, said that” we must explain institutions why the language problem is still present in Kosovo”.

The discussion continued through a panel whose topic was the presentation of the model of bilingual and intercultural education in the Republic of Northern Macedonia, which enabled the successful integration of students, parents and teachers from different ethnic communities through modern educational processes.

Veton Zekolli, Executive Director of the Nansen Dialogue Center in Skopje, shared his experiences in working in Northern Macedonia and pointed out that the goal was primarily to establish broken ties and trust in the municipality of Jegunovce and to offer students informal activities to break up. stereotypes, promoting tolerance and improving the quality of the education system. This school is also the first example of bilingual teaching in Northern Macedonia.

Suncica Milenkovic, a primary school teacher in the elementary school in Jasenovik (Novo Brdo), shared her personal experiences and emphasized that the Nansen model helped a lot for children to enjoy the learning process together with their peers from other communities.

The third panel discussion, held on the second day of the conference, was the presentation of key conclusions and recommendations of the research paper “Official Bilingualism in Kosovo. Key conditions and challenges”. This research addressed the main legal and institutional shortcomings in the protection of language rights in Kosovo and proposals for their protection.

Ognjen Gogic, project manager, pointed out that no one was punished for disrespecting language rights in Kosovo and that this is a practice that goes unpunished. This attitude was followed by Ivan Spasojevic, a law graduate from the Basic Court in Mitrovica, who pointed out that the big problem is the lack of qualified translators, which has the consequence that translations wait for two months.

Ben Murgatroyd, a policy researcher, pointed out that based on the research, two different language commissioners are being proposed, one to deal with legislation and the other exclusively for appeals.

How the phenomenon of not learning another official language in Kosovo affects young people was the topic of the fourth panel “Youth and the language gap”.

“Often we young people communicate in English, but I believe that learning Serbian and Albanian will help us better understand and facilitate communication among young people,” said Petar Djordjevic, a youth activist (Young Gracanica). Activist Anesa Colakovic (Peace4Development) emphasized that in every municipality there should be a language center that would organize courses and provide certificates of language proficiency.

Besa Bllacaku, a youth activist (Youth Task Force), especially emphasized the basic thesis of the conference that we need mutual language learning in order to move into the future and create bridges between young people in Kosovo.