Albin Kurti to reconsider his position on “unrealistic goals”, Srpska List to be part of the future Government 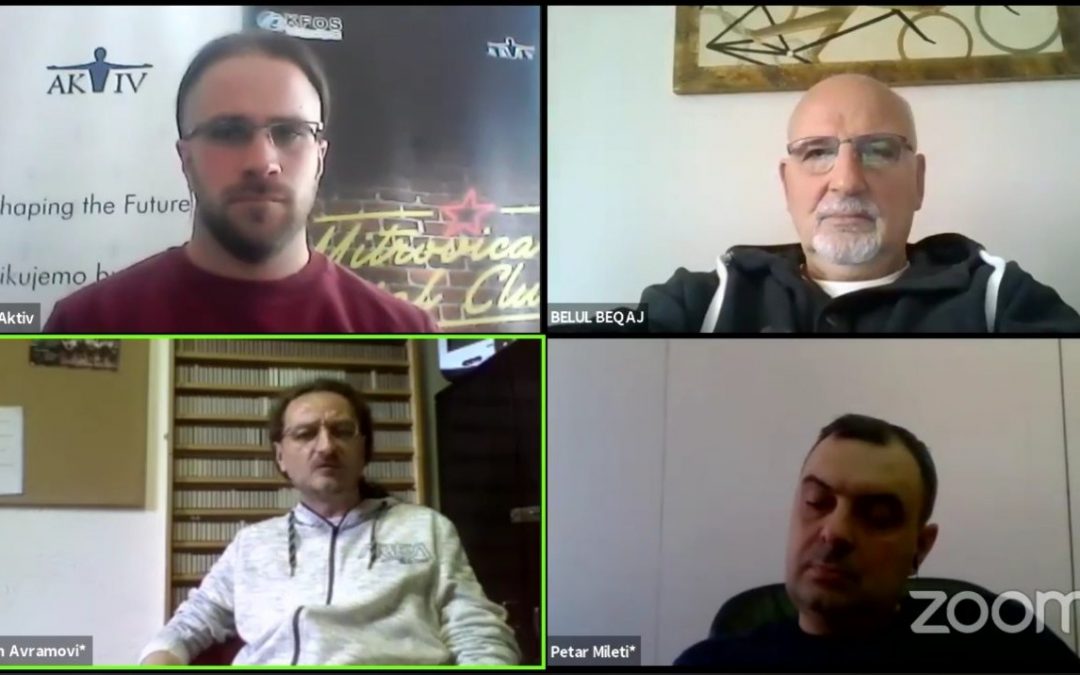 Just as the victory of the Self-Determination Movement (Vetevendosje) in the resent Kosovo elections was expected, so it should be the shift in Albin Kurti’s position on his “unrealistic political goals”. As the most plausible candidate for the Kosovo Prime Minister, Kurti will reconsider his attitude regarding the exclusion of the Srpska List from the future Government and the marginalisation of the dialogue with Belgrade, it has been concluded during the debate “What After the Elections?”.

The debate “What After the Elections” was held on February 24 within the Mitrovica Social Club project, implemented by the NGO Aktiv and supported by the Kosovo Foundation for Open Society (KFOS). The discussion was led by a political analyst and professor at the Faculty of Political Science in Pristina Belul Beqaj, former vice president of the Kosovo Assembly and former PSG presidency member Petar Miletić, and RTV KiM editor-in-chief Goran Avramović. The debate was moderated by the NGO Aktiv project manager Ognjen Gogić.

Commenting on the election results of the Kosovo Albanian majority parties, Belul Beqaj assessed that the reason for the landslide victory of the Self-Determination Movement should be sought in an eruption of citizens’ frustration towards the parties that previously led Kosovo. Even though forming the government will not be simple since the president elections should be organized at the same time, Beqaj believes that the new government will be formed by the Self-Determination Movement with the help of the minority communities representatives.

Furthermore, Beqaj expects the new president of Kosovo to be Vjosa Osmani, who won a larger number of votes in the elections than the leaders of other lists combined. The Democratic League of Kosovo (LDK) will provide the needed support for the election of their former member Osmani. According to Beqaj, new elections will lead to a further weakening of the defeated parties. For that reason, he believes it is in the best interest of the opposition parties to enable the president elections and avoid new early elections, as well as to use the time in opposition to recover.

The participants in the debate also assess the victory of the Srpska List in areas with Kosovo Serb majority as expected. Petar Miletić considers Albin Kurti’s statement on non-cooperation with the Srpska List, despite the fact it won ten seats at the parliament, incautious. Srpska List will inevitably be part of the new government since it is a constitutional obligation, he adds. Goran Avramović also agreed with this prediction, adding that the Srpska List has an “additional asset” amid the negotiations on government formation, and that is mandates of the other affiliated communities.

Similarly, Beqaj thinks that Srpska List is not a representative of the Kosovo Serbs but of Belgrade. Its legitimacy has been additionally deteriorated due to alleged instrumentalization of the other communities, according to him. Beqaj emphasizes that omissions of the Kosovo politicians towards the minority communities led to the fact that minority communities do not feel pleasant in Kosovo and do not see Kosovo institutions as their own. However, their instrumentalization by the Srpska List, Beqaj sees as a precedent which can call other constitutional provisions regarding the minority rights into question.

Miletić estimates that the support of the Srpska List to some Bosniak and Roma lists represents a classical political engineering. Miletić thinks it is dangerous since the Albanian parties can do something similar with a Serbian party in the next elections. He reminds that the system of a positive discrimination was introduced to protect the rights of the Serbian community to have their elected representatives in the institutions. Therefore, constitutional guarantees for the Kosovo Serbs can be compromised. He thinks this is not about the lack of solidarity and willingness of Srpska List to support the other communities. Instead, Miletic believes that the Srpska List simply estimated that they had surplus of votes which could disperse to the lists of other communities in order to be able to control a larger number of MPs in return, hence obtaining greater influence.

Regarding the support for the minority lists within the Kosovo Serb populated areas, Avramović believes that it is not possible to definitely determined whether this is an agreement with Srpska List and usurpation of minority votes. However, he thinks that this kind of outcome does not necessarily have to be negative, as it can cause the elected MPs to pay closer attention to the communities which elected them. In that regard, Avramović reminded of the excellent results of Adriana Hodžić in the north of Kosovo.

When it comes to Kurti’s statement on continuation of the Belgrade – Pristina dialogue being low on the list of his priorities, Miletić expects him to stay firm in his position since that is what has led him to the success he made. Avramović, on the other hand, believes this kind of statement was made for internal use. The dialogue will be relaunched due to the pressure of the international community. Nevertheless, it has no prospects of bringing any key results in the near future due to the upcoming election processes in Serbia and Kosovo. In addition, Biden’s Administration has not given up on the Washington Agreement, especially not in the part that corresponds with the US foreign policy, and both Belgrade and Pristina will not be excused from the commitment to work on its implementation, Avramović concludes.